Living in multiple countries in the past 5 years, Brazilian-born Ingrid Zanini is familiar with the concept of a “home away from home”. Before starting Arla’s F15 Programme, which has already taken her to Sweden and Denmark, Ingrid managed to get a Bachelor’s degree in Business at FGV São Paulo, an exchange semester at Rotterdam School of Management and a Master’s degree in Marketing at the University of St Gallen. Mean-while, she also worked in both start-ups and large international companies while studying. Now she works as an F15 Graduate in HR and next, she hopes to go closer to home and explore Latin America through a rotation with Arla.

When and how did you join Arla and what is your position now?
Arla is such a global company, but strangely I grew up and studied in countries where Arla does not have a strong presence: Brazil and Switzerland. Lucky for me, two friends of mine read about the Arla F15 Trainee Programme on the CEMS newsletter and immediately let me know that they thought it would be a great opportunity for me – and they were totally right!

So here I am now, working in Business Development in the Milk team in Stockholm as my very first rota-tion. My second rotation will be based in the Headquarters in Aarhus and will be related to Marketing and Innovation. 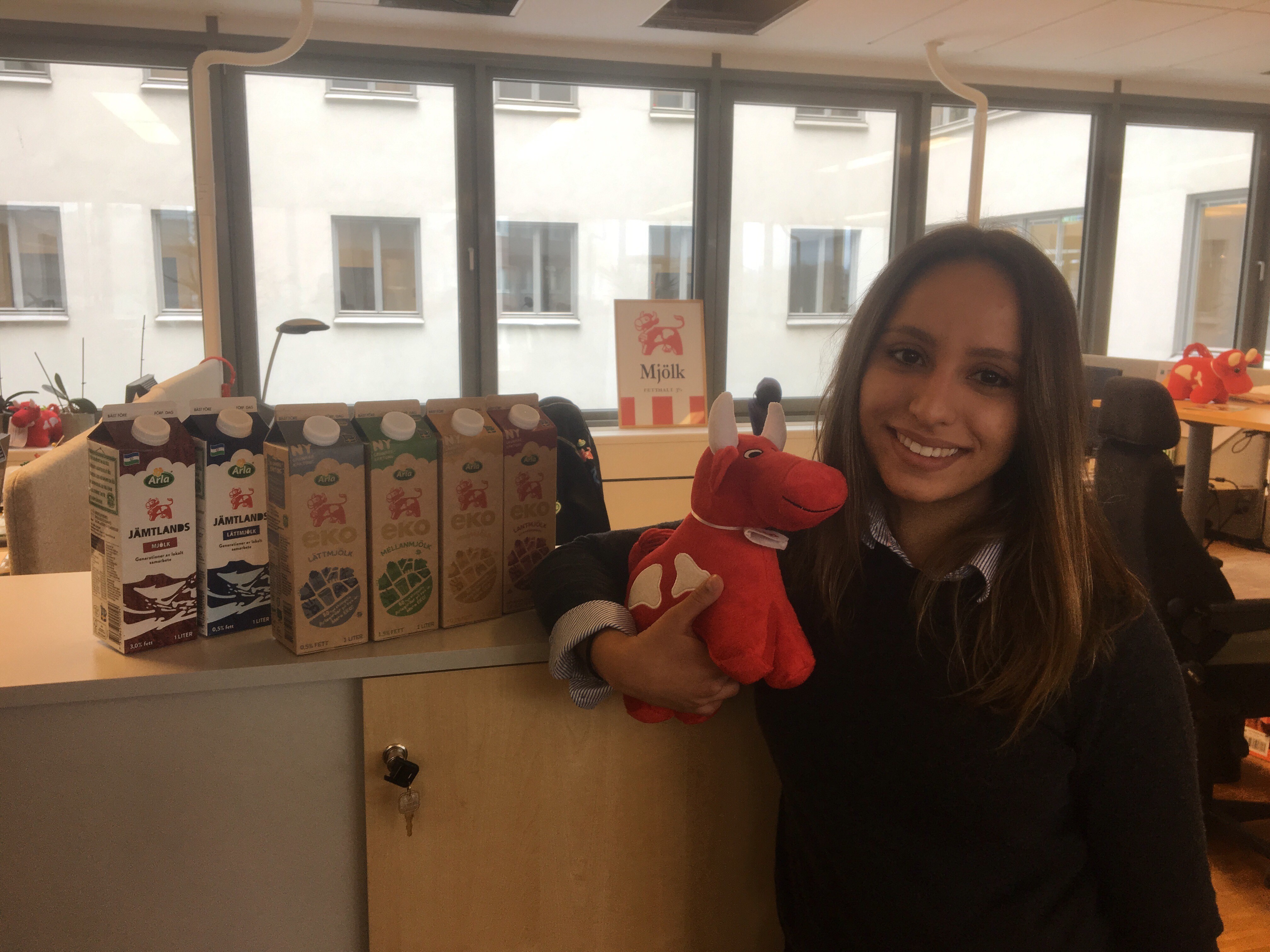 How has the F15® programme helped you to grow your career?
Even though I have been in the programme for just 6 months, I can feel I have learned a lot, especially when it comes to soft skills.

I am rather shy whenever I start in a new place. This trait has always been an obstacle for me because it usu-ally takes me a bit long to overcome my shyness and show what I am capable of. At Arla I was not really given an option to “stay in my shell”: in my first month, I was already put in a core position in a very strategic pro-ject for the Swedish market, which was building a strategy for Local Milk initiatives. On my second month I had already the first of many presentations I would have to do to the Swedish Leadership team. Although my hands were sweating and my heart was beating incredibly fast, the positive feedback I constantly received from my superiors helped me keep going and overcome my shyness much faster than usual – now I don’t even get (that) nervous anymore!

The fact that my managers (1) trusted me enough to place me in such a strategic project, (2) were giving me constant feedback on my work and (3) pushed me to get out of my comfort zone very early on was key to my development – and I believe that this is part of Arla’s culture, but it is even stronger in the F15 programme due to the short time you have to deliver in each rotation.

Now I can say that I will finish my first rotation feeling a lot more self-confident and happy with myself know-ing that my work had actually an impact in the company.

What has been your biggest challenge so far?
In terms of work environment, starting in Arla in Sweden was great for me: my team was made of incredibly kind and smart people that made their best to make me feel welcome.

I would say therefore that the biggest challenges I had to overcome were not related to the work itself, but actually were more personal, meaning, they were related to how I behaved and reacted to the situation I was in.

The first challenge I had was learning to be as kind to myself as others were. Since this is my very first full time job, I really wanted to give my best and show that picking me out of 1500 other candidates really was the best choice for Arla. I still have this attitude, but I also learned that making mistakes does not mean that I was a wrong choice. My team and managers never put me down when I made a mistake - you are expected to make them! -, but it was a challenge for me to accept that it was OK to be less than perfect and that the sooner you get back on track, the better.

The second biggest challenge was adapting to a new country so different from mine. I grew up in Brazil and have already lived for different periods of time in Canada, Holland and Switzerland, so I had the tools to help me feel comfortable in a new place, but it still was a lot of work. I again had to get out of my comfort zone and create my own network in Stockholm so that it would feel like home to me. I can say that I was successful, but it was a lot of work. And in a month I will have to do it all over again! But that’s also what makes the F15 programme so much fun: constantly needing to reinvent and readapt yourself!

What’s your next step?
My very next step will be moving to Denmark to start my next rotation in Aarhus. My long-term step, or what would my dream, would be leading Arla’s expansion in Latin America. It is not part of Arla’s Good Growth 2020 strategy, but who knows what will come later?

As a F15 Graduate you are expected to become one of Arla's future leaders and help shape our business moving forward. The F15® Graduate Programme is a fast-track leadership programme that includes three different eight-month rotations.